Towards a Better You
Home Better Ladies International Run – The Non-Runners Guide to Running the New York... 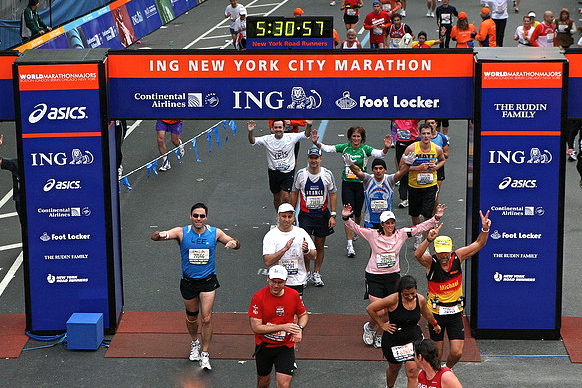 #212 Monday Mentoring – Is Your Dream in Focus?

#210 Leadership Lessons – Our Values Set the Core for Success

#209 Monday Mentoring – To Get Clarity on Your Dreams Discover This

It hasn’t been all plain sailing since my last post on January 29th. Thursday the 8th February, on a routine morning 3km run, soreness in my right Achilles sharpened in one blow, tearing the right calf in a split second of excruciating pain. A grade two tear has kept me firstly in rest and recuperation building from total rest to light walking (strolling) to brisk walking and after three weeks, some light running.

I certainly didn’t want to come back early, and make it worse. Which make me very nervous as our first “fun-run” approached on Sunday the 4th March. Right up until the morning of, I wasn’t sure of me taking it on but I chose to. Here I was in prior to the run with my wife Sharon and daughter Tayla.

And I survived. My wife and daughter killed and I completed which was my major objective and ran for most of the course which was beyond what I thought was possible. The first kilometer was the toughest and as always you get carried away with the crowd, and after just 500m my Achilles was in ache mode. My mind went to a bad place and I contemplated pulling out, but instead chose to stop, stretch and walk to keep warm.

I again started a slow, light jog at the 3km mark and alternated for the next couple of kms until finally achieving completion and an average time of over 7 minutes a kilometer. At that rate, I could plan a time for the 42kms of the New York Marathon of just under five hours. Something to aim for.

I will rest for the next day or so, as the calves will tighten up but stoked with the foundation that and the confidence that run brought. The next run is in six weeks and my goal will be to be running again and to aim for the full ten kilometers. Fingers crossed the dodgy calves and the tight achilles holds me up.

Are Your Abilities Helping or Hindering You?

Jamie Rose - The Happiness Ninja - August 6, 2018 0
A couple of years ago I was introduced to something called Realise2.  I quickly learned this to be an advanced personal and professional developmental...

Joss Honour - September 26, 2016 0
Two Warm Days Two warm days Last week in Melbourne the weather turned Spring like ... For two days. Melbourne is like that, we hit the start...

Tony Curl - December 27, 2018 0
In this episode, I  share the five things you seriously must do before you set any plans for 2019. Before you do a New Years Resolutions you should – seriously – do these five things first. I would not set a resolution on a whim, or because someone...

#212 Monday Mentoring – Is Your Dream in Focus?

Addictive Foods and their Harmful Consequences

A Letter to my Daughter

The Soundtrack of My Life Part 1

9 Daily Practices To Keep You Motivated

#42 Dealing with Deception – Lifting the Heavy Veil of Deception